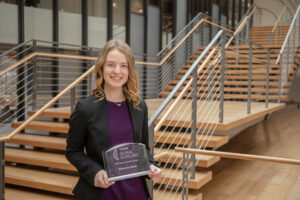 She was among 20 children of company employees to receive a scholarship in the program, which began in 1958. The scholarships, with a total value of $540,000 over four years, went to students in the United States, Romania, India, Poland, France and Mexico.

“This is just going to help so much,” the Louisville High grad said after learning she received the award. Her plans are to pursue advanced degrees and become a licensed bilingual speech pathologist who specializes in inpatient pediatrics. Beck is minoring in Spanish.